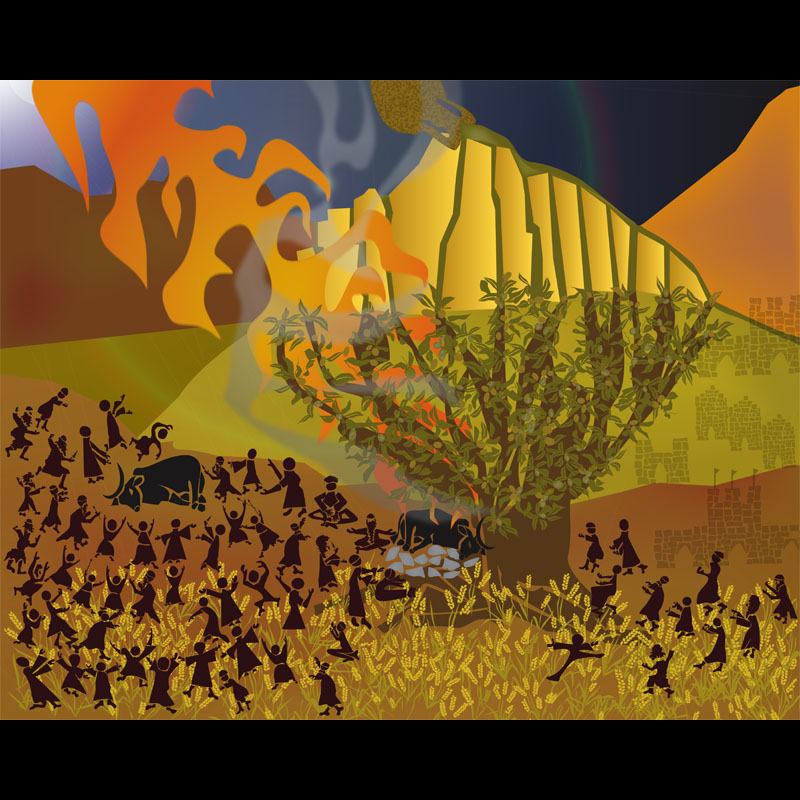 “From Asher—his bread will have richness, and he will provide kingly delicacies.” (Genesis 49:20)

“The most blessed of children is Asher; he shall be pleasing to his brothers, and dip his feet in oil.” (Deuteronomy 33:24)

The seventh piece in Lynette Joel’s Twelve Tribes of Jacob is “Asher.”  The piece is back-dropped by the outline of Mount Carmel, which was located within the portion of the tribe of Asher.  The mountain is painted in an olive-gold with the appearance of olive-green oil flowing from its peaks.  Mount Carmel was an especially fertile and bountiful mountain.  The commentaries tell us that Asher’s land was blessed with such an abundance of olive oil that it flowed like rivers and supplied oil for the entire nation of Israel.  The entire nation of Israel showered blessings on Asher in gratitude for the oil they provided. The kings of all the neighboring nations would pay a special tribute to Asher in order to have the right to bathe and anoint themselves in their oil.  In addition, the foothills of the mountains were especially ripe for the produce of wheat and grains.

Perhaps one of the most dramatic events in the books of Prophets occurred on in the land of Asher: the story of Elijah the Prophet on Mount Carmel.  In the days Elijah, the Jewish people had strayed away from the service of G-d and worshiped the idol, Baal.  Elijah told the King Ahab to gather  Israel on the mountain as well as the idolatrous prophets.  Elijah said to all the people: “How long will you dance on both sides of the fence?  If G-d true, go after him!  And if the Baal is true, go after it!”  The people did not answer.  Elijah then said “I am the only remaining a prophet of G-d and the prophets of the Baal are four hundred and fifty men.  Let us have two bulls.  Let them choose one bull for themselves slaughter it, and place it on the pyre and not apply the fire and I will prepare the other and I too will not apply the fire.  You shall call out in the name of your Gods, and I shall call out in the name of my G-d and whichever god responds with fire, he is the true god.”  The prophets of Baal prepared there bull and waited until morning, but nothing happened.  At noontime, Elijah ridiculed them that perhaps their G-d was preoccupied.  Then, the prophets cut themselves with swords and spears and prophesied that their God will still answer.  There was no response.  Elijah then brought the people in and took twelve stones for the twelve tribes of Jacob. He built the stones into an altar and made a trench around it and asked them to fill it with water.  He arranged the wood, cut the bull, prepared the altar.  Then he said “G-d, today it is become known that You are G-d in Israel and I am your servant and that is by your word that I have done these things. Answer me Hashem answer me.”  Then, a fire of G-d descended and consumed the sacrifice and licked up all the water in the trench. The entire people saw, and fell on their faces and said “G-d is true.”  They then seized the prophets of baal and slaughtered them and left them in the Kishon Stream.