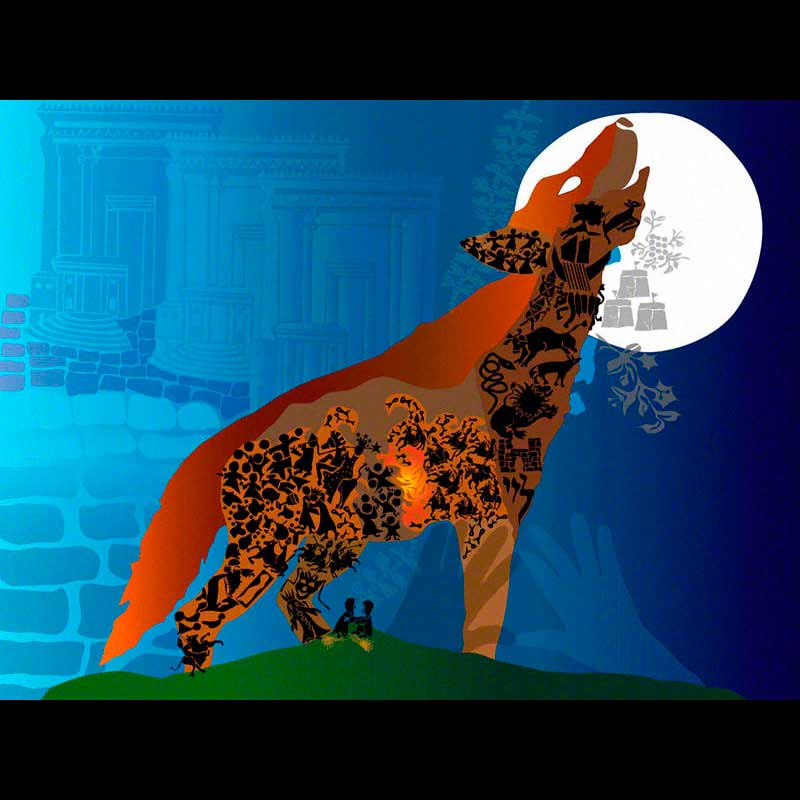 “Benjamin is a predatory wolf; in the morning he will devour prey, and in the evening he will distribute spoils.” (Genesis 49:27)

“Of Benjamin he said: may Hashem’s beloved dwell securely by him; He hovers over him all day long; and rests between his shoulders.” (Deuteronomy 33:12)

“Benjamin,” the fifth piece in Lynette Joel’s Twelve Tribes of Jacob, is perhaps the most complex and dramatic of series.  Benjamin was the final and most beloved son of Jacob.  Jacob and his wives departed from Laban to return to the Land of Israel.  When they arrived in Efrath, Rachel, Jacob’s most beloved wife, died in childbirth as she bore Jacob his twelfth son.  As her soul left her, she named him Ben-Oni, the son of my suffering, and Jacob named him Benjamin.  Rachel’s two sons, Benjamin and Joseph, share a deep eternal bond as her only two children after many years of suffering.  When Joseph was viceroy of Egypt, it was Benjamin he wanted to see before he revealed himself to his brothers.  The brothers beseeched Jacob to allow them to bring Benjamin down to Egypt.  Only after Judah swore to return Benjamin to his father, did Jacob concede to allow him to go.  When Joseph saw his beloved maternal brother he could not control himself and ran to another room to weep.  When he sent the brothers, he gave Benjamin five times the portion of the other brothers and commanded his servant to place his silver goblet in the sack of Benjamin.  Upon sending them away, the servant was sent to search for the goblet, and the goblet was found in Benjamin’s sack.  After the brothers proved their loyalty to Jacob and their regret for their mistreatment of Joseph, he revealed himself and fell upon Benjamin’s neck and wept, and Benjamin wept on Joseph’s neck.  The Talmud tells us that they were not weeping from their own grief, but for the pain of the destruction of the two Temples that resided in the portion of Benjamin.  Since Benjamin was the most beloved of Jacob’s son, the Temple was placed in his land.  Before the Temple was built, the Tabernacle resided in Shilo for many years, which was also in the land of Benjamin.  The sages say that every year in the fifteenth day of Av, the young women would dress in white clothing and dance in the vineyards of Shilo, and the men would come and observe them in order to find a mate.