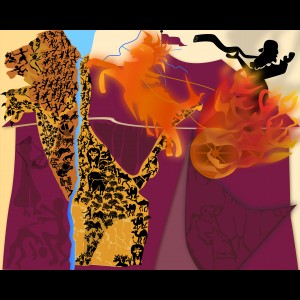 “Gad will recruit a regiment and it will retreat on its heel”. (Genesis 49:19)

“Of Gad he said: Blessed is He Who broadens Gad; he dwells like a lion, tearing off arm and even head. He chose his first portion for himself, for that is where the lawgiver’s plot is hidden; he came at the head of the nation, carrying out Hashem’s justice and his ordinances with Israel.” (Deuteronomy 33..20-21)

From Gad came legions of armed warriors who crossed the Jordan river with their brothers to conquer the land of Israel (in the times of Joshua) and then they returned to their portion on the other side of the Jordan river, where there was a lot of spacious property, which they needed for their cattle. They were nomads and warriors who lived in tents. Since Gad dwells on a large swath of land on the border he fought many battles with the nations of Amon and Moab. They were strong warriors and are likened to a lion.

Gad’s warriors wounded their enemies by cutting them between the arm and the neck. This symbolizes tefillin (phylacteries). Gad was totally connected in mind and action (head and arm tefillin) to G-d, and complete. Their enemies were cut, indicating a lack of perfection.

Gad will be the bearer of good news and new beginnings (Moshiach, Messiah). He is therefore associated with the month of Elul (and the sign of Virgo),  which heralds and prepares for Rosh Hashanah, and the crowning of the King. Elijah the Prophet, who some believe was from the  tribe of Gad, will herald the coming of the Messiah with the sound of the Shofar.