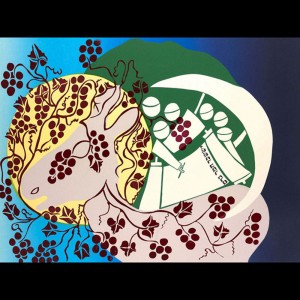 “Issachar is a strong-boned donkey; he rests between the boundaries.  He saw tranquility that it was good, and the land that it was pleasant, yet he bent his shoulder to  bear and he became an indentured laborer.” (Genesis 49:14)

“Rejoice, O Zebulun, in your excursions, and Issachar in your tents.  The tribes will assemble at the mount, there they will slaughter offerings of righteousness, for by the riches of the sea they will be nourished, and by the treasures concealed by the sand.” (Deuteronomy 33:18-19)

The tribe of Issachar was a tribe of scholars.  Their unique economic relationship with Zebulun, in which Zebulun supported Issachar, provided them the freedom to devote their times to Rabbinic scholarship, spiritual growth, and the pursuit of wisdom.  The verse describes Issachar as a strong donkey who takes the yoke of Torah on his back.  The Zohar explains that just as a donkey carries the heavy burdens of its master and its nature is not to rebel against its master’s will, Issachar humbly bears the yoke of Torah day and night for the pure sake of his Master, G-d.  Therefore, Issachar found tranquility and pleasantness in the satisfying life of spiritual pursuit.

This concept is represented in “Issachar,” the second of Lynette Joel’s Twelve Tribes of Israel.  The Torah scholars are depicted on the donkey’s back, representing the burden of Torah carried by Issachar.  The image of the merchant ship is cleverly woven into the image of the Torah scholars, because the ships of Zebulun enabled Issachar to devote their time to Torah.  Issachar’s portion in the land of Israel was a land of fields and vineyards.  Therefore, Issachar was not required to engage in business to support themselves, for they were able to subsist of their own resources.

Issachar was born in the month of Av, corresponding to the destruction of the Temple. This suggests that the re-building of the Temple can be achieved by the diligent study and understanding of Torah. Symbolized by Issachar who was absolutely absorbed in Torah. The Medrash relates that Issachar was the main delegation to the Sanhedren, and the law was always decided in accordance with the tribe of Issacher.