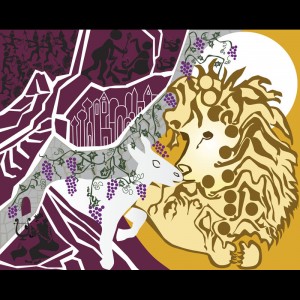 “Yehudah—You, your brothers shall acknowledge; your hand will be at your enemies’ nape; your father’s sons will prostrate themselves to you. A lion cub is Yehudah, from the prey, my son, you elevated yourself.  He crouches, lies down like a lion, and like an awesome lion, who dares to rouse him? The scepter shall not depart from Yehudah, nor a scholar from among his descendants until Shiloh arrives and his will be an assemblage of nations. He will ties his donkey to the vine; to the vine-branch his donkey’s foal; he will launder his garments in wine and his robe in the blood of grapes. Red-eyed from wine, and white-toothed from milk.” (Genesis 49:8-12)

“Hearken, Hashem to Judah’s voice, and return him to his people; may his hands fight his grievance and may You be a Helper against his enemies.” (Deuteronomy 33:7)

Judah had three sons: Er, Onan, and Shelah.  Judah took a stunningly beautiful young woman, Tamar as a wife for Er, his firstborn.  Er did not want to destroy Tamar’s beauty by impregnating her so before he would have relations he would spill his seed.  For this sin, G-d killed Er.  Judah than had to Tamar marry his next son, Onan, according to the Jewish ritual of levirate marriage.  He too spilled his seed on the ground before consorting with Tamar.  Onan died as well.  Judah did not want Tamar to marry his third son, Shelah, so he sent her away.  Once, when Tamar heard that Judah was nearby, she covered herself with a veil and stood at the crossroads like a prostitute.  Judah saw the prostitute and asked her to consort with him in exchange for a goat from his flock.   As collateral he gave her his  signet, his wrap, and his staff.   Tamar conceived from this relationship. Three months later, Judah heard that Tamar had committed harlotry and was pregnant.  Judah commanded that they take her out to be burned.  As she was on her way to the stake, she proclaimed the father of the child was the one to whom the signet, wrap, and staff belonged, and Judah conceded that he had done wrong.  The sages tell us that the descendants of this union were King David, the royalty of the Jewish people, Isaiah the prophet, the heads of Sanhedrin (the supreme rabbinic court), and King Messiah.

King David was the patriarch of the Davidic dynasty of kings that lasted hundreds of years until the exile and destruction of the temple.  The sages tell us that he was so involved in the service of G-d, that he never slept more than sixty breaths.  At night, he would lay in his bed with the window open.  The breeze would enter and King David would awake to the sweet sounds of wind chimes above his head arousing him to get up and serve G-d.

The tribe of Judah is represented by the lion, the king of the beasts.  Upon close examination of this piece of art, one will notice the subtle allusion to the twelve tribes of Israel bowing down to the King Judah in the hair of the lion.  The color scheme also reflects the royalty of Judah.  A deep wine-colored purple was the color of Davidic monarchy.  In addition, the portion of the tribe of Judah is described in the verse as flowing like a fountain of wine from mountains appearing purple from the abundance of grapes.  Judah’s fields flowed white from the abundant wheat.  The sages say that the tribe of Judah was red-eyed from wine, and their teeth were pearly white from the abundance of milk in their portion.