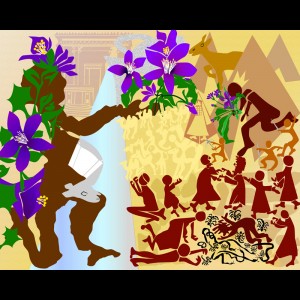 Reuben went out in the days of the wheat harvest; he found dudaim in the field and brought them to Leah his mother; Rachel said to Leah “Please give me some of your son’s dudaim.  But she said to her, “Was your taking my husband insignificant?—And now to take my son’s Dudaim!” Rachel said, “Therefore, he shall lie with you tonight in return for your son’s Dudaim.” (Genesis 30:14)

There are three opinions on what Dudaim are:

The prevailing opinion is that the dudaim were Jasmine or Mandrake, and in fact this was the symbol that was depicted on Reuben’s flag.

The Mandrake is a flower that appears like the shape of a human: two hands, two feet, and a head.  The Jasmine’s roots look like a human as well.  Therefore, it was believed that they were a segulah for conception.  Since Reuben saw that his mother had stopped giving birth, he gave her the dudaim to help her have another child.

Also, the fruit looks similar to an apple, and smells good.

The word dudaim comes from the root “dodi” which means “my beloved.”  They were believed to be a type of aphrodisiac, promoting love, affection, and attraction between a couple.  Leah used them to scent Jacob’s bed to entice him to have relations with her.

The Medrash tells that after Leah exchanged some of the Dudaim for that night’s sleep with Jacob, she conceived Issachar.  The verse says about Issachar (when translated literally) “The donkey caused Issachar.”  The medrash explains that that evening, Leah was sitting in her tent.  Jacob was coming home from the fields on his way to Rachel’s tent where he was due to sleep that night.  As he passed Leah’s tent, she recognized the bray of his donkey.  She went  out to greet him and told him that she had exchanged that night’s sleep with Rachel, so Jacob came to sleep in Leah’s tent and that night Issachar was conceived.  So, literally, the donkey caused Issachar’s conception.

“Reuben, you are my firstborn, my strength and my initial vigor, foremost in rank, and foremost in power.  Water-like impetuosity—you cannot be foremost, because you mounted your father’s bed; then you desecrated Him Who ascended my couch.” (Genesis 48:3-4)

Jacob maintained a bed in each of his wives tents, but his main bed was in Rachel’s tent.  After Rachel passed away, Jacob moved his permanent bed into the tent of Bilhah, who was his Rachel’s servant.  Reuben was the oldest of Jacob’s sons, and the oldest son born to Leah.  He felt that by not moving into Leah’s tent, Jacob had offended the honor of Leah, and therefore Reuben wanted to defend her honor.  Therefore, the verse (Genesis 35:22) states that Reuben slept with his step-mother Bilhah, Jacob’s concubine.  The Gemorah says that he didn’t actually have relations with her, rather he moved Jacob’s bed so that Jacob would not sleep with Bilhah, and this was tantamount to him actually sleeping with her.  This is why the verse says “He went up” on her bed, and didn’t actually do anything more.

Being the firstborn son, Reuben was supposed to have received the three leadership positions in the Jewish people:

However, because of this act with Bilhah, he lost all three of these rights.  This is what is meant by the comparison to water.  As opposed to wine or oil, when one pours water out of a pitcher, there is no leftover water left in the pitcher.  So too, because of this action, Reuben made himself mundane, and was left with none of his rights.

Reuben’s impetuosity is likened to water.  Just as water flows quickly on its way, so to Reuben was quick to show his anger.

Reuben’s Role in the Sale of Joseph

The brothers wanted to kill Joseph.  Reuben heard and rescued Joseph by telling them to throw him in the pit instead.  He intended to come back and save Joseph.  But, he left the scene, and the brothers sold him to the Ishmaelites.  When Reuben returned, he was shocked to see that Joseph was no longer in the pit.

Reuben’s Role in the Conquest of Israel

After the Jewish people conquered the nation of Midian before entering the land of Israel, the tribes of Reuben, Gad, and half of Menashe saw the plains of Gilead that were in Midian’s land and saw that they were good for livestock.  So, they requested that they be allowed to stay and take their portion on the other side of the Jordan.  They would build fortified cities there and pens for their livestock.  Moshe was not happy with their request because it reflected a lack of desire to enter the land of Israel and take responsibility for the conquest of the land.  So, they made a deal.  Moses told them that if they arm themselves for battle and all the men would cross the Jordan and lead the Jewish people in their conquest of the land, than they would be vindicated and the land on the other side of the Jordan would be their portion,.  So, they agreed.

Later, in the book of Joshua, they fulfilled their side of the deal and left their wives and children over the Jordan, and led the Jewish people valiantly into battle.  After the land was divided among the tribes they went back to their families.

May Reuben live and not die, and may his population be included in the count. (Deuteronomy 33:6)

Gemorah Sanhedrin: How do we know that there is resurrection of the dead in the Torah?  From this posuk.  May Reuben live: this is referring to this world.  And not die: this refers to the next world.

Ramban: this bracha is a reference to the conquest of the land of Israel.   Reuben were the first to lead the Jews into battle so they needed a blessing that should not be conquered.  There are three blessings included:

In the uprising of Korach against Moshe, many of the Great Assembly that were killed came from the tribe of Reuben.