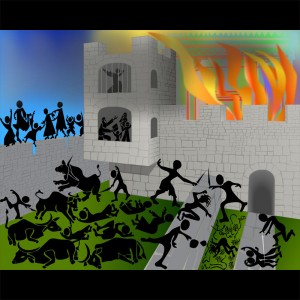 “And it came to pass on the third day, when they were in pain, two of Jacob’s sons, Shimon and Levi, Dina’s brothers, each took his sword….and killed every male.” (Genesis 34:25)

“If Shimon and Levi came together, no king or ruler will be able to withstand them. I will separate them within Jacob”. (Genesis- 49:7)

“For in their rage they murdered people and at their whim they hamstrung an ox” .(Genesis 49:5)

Shimon and Levi are joined in conspiracy, violence and needless destructive actions, as evidenced in the episode of the rape of their sister Dinah, leading to revenge and the killing of the males of Schechem, as they were recovering from circumcision. Their gratuitous injuring of oxen indicates their vengeful nature.

He led the plot against Joseph and was the first to cast him into the pit, and threw large rocks onto him with the intention of killing him. Consequently in Egypt, Joseph placed Shimon in prison as a hostage, to ensure that Benjamin would be brought back to Egypt when the brothers returned to collect their grain.

Shimon is not blessed by Moshe at the end of the Torah, symbolizing disapproval of his violent nature. Jacob does, however, mention Shimon to condemn his violent acts. The Tribe of Shimon is therefore dispersed among the other tribes.

They were to become humble itinerant teachers.

Shimon is associated with the month of Av and the destruction of the Temples. This resulted from the evil report of the spies, and the fact that the Israelites sinned by listening to them (Shimon means listening). The rectification of this incorrect “listening” will result in the rebuilding of the Temple.